A Series of Unfortunate Events

We like to document our conversations with Mary and Mansoor because they are always rather confusing and hilarious and this was no exception. 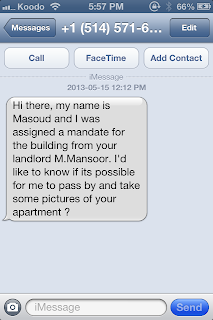 Not having any idea who Masoud is or why he needs to come take pictures of our apartment I forwarded the message to Kinsey who said she would call him. In the meantime she called Mansoor, "Hello Mansoor", "Hello Candy" he replied. As Kinsey explained this text message we'd received and reminded him that we'd already sent him beautiful pictures of the apartment that Katie had taken, Mansoor attempted to comfort her saying, "oh yes Masoud, very nice man, very nice man" but couldn't tell her why Masoud needed pictures and told her to call Mary.

We didn't call Mary but she texted us! 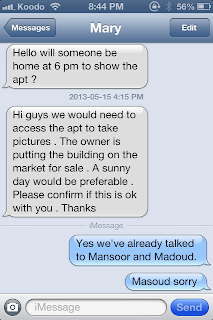 We continued to worry. Kinsey would be home at 6 but our rooms were not clean and we weren't exactly prepared to clean the apartment in they way that we would normally for a photoshoot!

We called Mansoor again to try to find away to stop this stranger from coming to our apartment to take pictures of our bedrooms... Mansoor seemed completely oblivious to the situation and told us to call Mary again. We texted her: 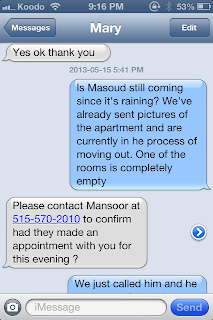 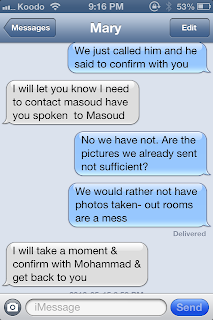 And look at that: she told us to call Mansoor! (What?!?) And who in the world is Mohammad?! Clearly neither of them have a clue. I'm guessing this guy is not coming.

Turns out Kinsey didn't actually respond to the text message from Masoud (and neither did I or Mary or Mansoor). I got a phone call from him this morning asking if I'd received the message and we finally sorted things out! He doesn't even need pictures! He has a client who is interested in buying the apartment building and just wants to see the layout.

So this what is what we get for being "dream tenants". Our apartment seems to be constantly being shown!

Masoud said he would check with his client about what time would work with him and he would get back to us. We have yet to hear back from him. So this is all to be continued...JOY!