See? I wasn't lying. Bracketed are witty comments by yours truly. (I couldn't resist.)

A wall of rain collapsed onto Montreal in one torrential instant (honestly-- one second it was sunny; the next it was dark and hurricane-like!) that flooded city streets, closed subway stations, caused power failures (thankfully not here!), damaged private property and forced evacuations from public buildings Tuesday.

It took only a few minutes to transform downtown streets into miniature canals. The foul odour of overflowing sewage floated over the area near the port. (Yum! Fortunately only our sink gurgled a tad.)

Many thousands of people were affected. While some scooped water from their own basements (three cheers for living on the fourth floor!), much larger buildings were evacuated including a fancy downtown hotel, the Quebec provincial library, multiple university pavilions (recall: the McGill broadcast email), commercial centres and a large part of the metro system.

More than 28,000 people lost electricity in Quebec, with more than half those disruptions occurring in the province’s biggest city. All but about 4,300 customers in the province and 1,900 in Montreal regained their power later in the evening. (Dodged that bullet!)

The brief but powerful storm saw a sunny afternoon lapse into night-like darkness (dun, dun, dun...). A solid slab of water crashed through the air, eventually bursting sideways in what looked like puffy, swirling white clouds.

The rain overwhelmed the city’s aging infrastructure in some places, with water pushing up through manhole covers and sometimes lifting them up.

People scrambled through the streets, some screaming as they were pelted and struggling to cling to umbrellas that seemed about to fly out of their hands. (Does anyone remember my windy day video filmed last year with Tori?! Montrealers have special relationships with their umbrellas...)

By the time it was over, there were cars partly submerged in what looked like little lakes, while a pool of water covered several subway stations. 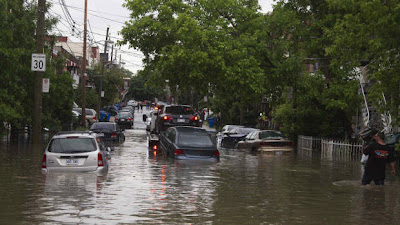 Posted by Katherine Ernst at 00:30