You may not know this about us Tupper ladies but we are actually die-heartt hockey fans. Well, maybe die-heart is a little strong, but I was raised a Habs fan and Kinsey, from Toronto (or close enough) loves the Leafs (and with encouragement from Brad, has become really quite impressively knowledgeable about the team as well as the game itself). So, since both teams were playing this round, we had our computers streaming the games almost every night this week! Even though Montreal was beat out earlier on (sad, I know-especially living in Montreal) I still enjoyed the Toronto-Boston series. Kinsey and I would shout to each other from our respective rooms as we watched the plays unfold..."Kessel with the puck again, heading towards the Boston net...GOAL!!!" It was really rather exciting. Tonight was especially thrilling. Kinsey texted me updates during the first two periods while I was out and upon my return we cuddled up on the couch together, eyes glued to the computer screen. 4-2, 4-3, 4-4, over time!!! Exhilarating. AND, Miss Katherine Ernst called just in time for the final minutes of the third period so all the Tupper ladies could experience the excitement (and disappointment) together. Truly a bonding experience. Thankfully, Katie had lots of news and stories of her time at home and at camp to take our mind off the loss. Maybe next year Habs and Leafs fans! 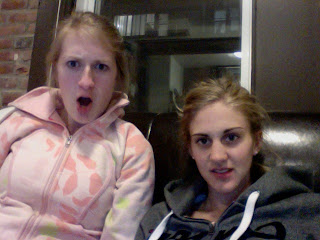 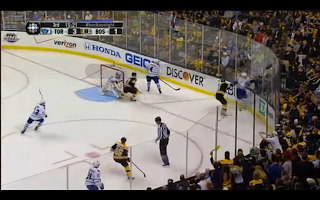 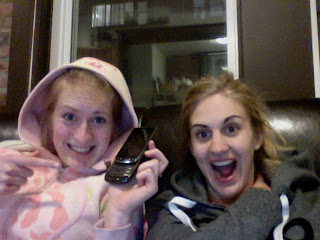 Ending the evening talking to our girl, Katie :)