Today's post comes to you courtesy Lynn Moore at the Montreal Gazette. The girls of 1900 Tupper did not participate, though it seems it would have been an event in which we could have excelled. And with de-stressing benefits! Who knew. 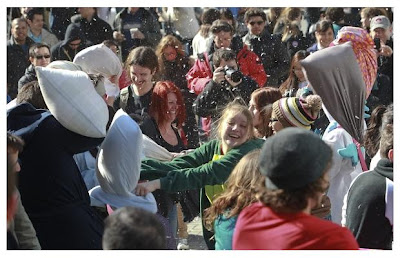 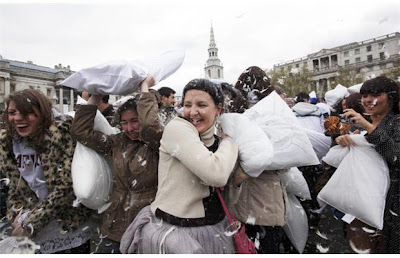 Strangers struck strangers repeatedly with wild abandon, often laughing manically as they did so.

No police presence. No arrests. No property damage.

It was a feathery fracas, a pillow fight and part of International Pillow Fight Day, which had feathers flying in cities and towns around the world.

“It’s fun,” John Fotheringham, a fight veteran with four of the annual events under his belt, said Saturday.

“It’s held outside on a spring day. It’s positive. And it has this energy bolstering feeling that is really good.”

About 125 people, many dressed in pyjamas, participated in the pillow fight, while about 250 people with cameras and smartphones recorded the event.

“It’s a really good form of de-stressing,” said Solene Troussé, a French national who recently arrived for a one-year stay in Montreal.

“I’m fighting, but it is with the spirit of love,” she said.

The fight, which periodically generated plumes of feathers as pillows burst their seams, started at 3 p.m. It was still going strong an hour later.

The Montreal band Motel Raphael used the occasion to shoot a music video with a production team from Moving Mind Studio.

This year’s fight included a DJ and participation by Kigurumi.ca, the folks who produce one-piece jammies that look like animal costumes.

Fight rules can be found on a website that advises would-be organizers not to seek permits from authorities.

Posted by Katherine Ernst at 13:19