A mystery package addressed to the ladies of Tupper arrived from Amazon this past week.

Faithful blog follower and my IB buddy Zahra M. happened upon this best-selling butter chicken book recently and--being all too familiar with our fondness for Indian edibles--sent it our way. Zahra, you're awesome. 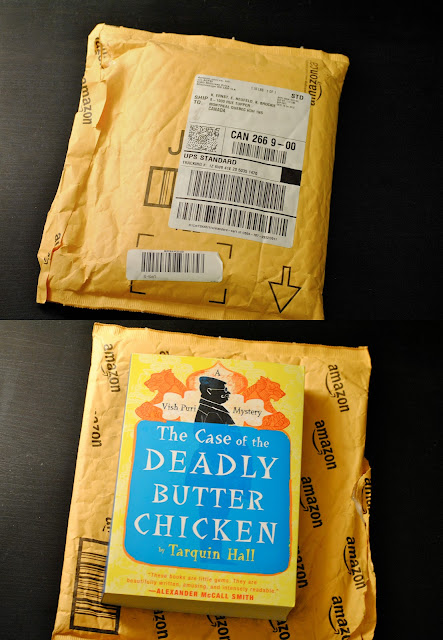 (It's difficult to make out the Bollywood tunes playing in the background, but in true Tupper style, we went for the full effect. And Zahra, you should know Kinseep worked really hard on her accent, just for you. This is take three.)

Long-held secrets, deadly lies, a sports scandal, and a poisoned helping of butter chicken -- all in a day's work for the head of Delhi's Most Private Investigators, in this latest book in the delightful Vish Puri detective series. When the father of a Pakistani star cricket player falls dead during a glamorous India Premier League dinner, clearly it isn't just a case of Delhi Belly. But which of the VIPs at the victim's table is responsible for poisoning the man's butter chicken? And was the victim killed for his involvement with a gambling syndicate that controls cricket's illegal billion-dollar betting industry? The answers seem to lie across the border in Pakistan -- the one country Puri swore he would never set foot in. Or do they? For Puri's beloved Mummy-ji, who has a unique insight into the killing, believes there is much more to this murder than meets the eye. Puri and Mummy-ji's search for the truth will lead them to uncover decades-old secrets and tragedies thought best forgotten in their most compelling case yet.

Let's hope the book doesn't give us food poisoning.
Posted by Katherine Ernst at 07:42