Call it what you will ("oldest child syndrome," maybe?) but Kinsey and I love a good tattle.

Which is why, when we were tryyying to sleep last night (this morning...hmph), we felt the need to intervene in the rowdiness going on outside Tupper. We dealt with the situation with celerity and severity. Here's how it went down.

Kinsey: "HOW AM I SUPPOSED TO SLEEP. HOW AM I SUPPOSED TO STUDY. SERIOUSLY, THIS IS RIDICULOUS. I CAN HEAR THEIR MUSIC. THEY'RE SO NOISY. I CAN HEAR THEM LAUGHING. IS THE PARTY IN MY ROOM? MY EARPLUGS AREN'T ANY GOOD. I CAN'T SLEEP. I CAN'T STUDY. GRRRRR." (It was loud, and I did agree with everything about which Kinsey was grumbling, but my only response was to giggle. I was neither trying to study nor sleep, and Kinsey was providing with me good Saturday night entertainment. Further, Kinsey would stomp back and forth between her room and mine and insist the racket was louder in her room. Because Kinsey is an easy tease, I pretended not to believe her, much to her chagrin. Heheh. Anyway, these sorts of comments persisted for a good half hour.)

Eventually Kinsey remarks, "I'M CALLING 9-1-1." (This is when the real action begins.)

Katie: "Okay? But I'm not talking to them. I talked to them last time." (I was referring to another Model Citizen scenario back in May, but this is a story for another blog post, or not, because it was actually scary.)

Kinsey, still on the phone, and I walk to the window where we have a bird's eye view of the festivities below. Given that it is Halloween weekend, we are not surprised to see party-goers in all manner of goofy attire. As luck would have it, the Pope, Osama Bin Laden, and Santa are all in attendance. Suddenly we notice there is a fire. Kinsey reports this to the dispatcher: "THERE IS A MASSIVE BONFIRE."

Kinsey pulls the phone away from her face and tells me that they are transferring us to the fire department AND that I must speak to the other dispatcher. "I talked the first half; now it's your turn," she informs me. I grudgingly oblige. The girl is persuasive when she needs to be.

I tell the new dispatcher what's going on. She asks me, repeatedly, whether our building is on fire (it isn't). She says she's sending someone (i.e. the neighborhood fire brigade) to deal with the situation.

Kinsey and I settle onto the living room couch to await the arrival of the trusty authorities. Only then Kinsey gets a phone call from the dispatcher again. She informs me that we have to talk to the firemen (they can't find the party). I deduce the firemen are all deaf.

We're in our pajamas, so we hurriedly throw on some proper clothing, find some shoes (Kinsey steals mine... what else is new), and run outside.


Exhibit A: Kinsey pointing the friendly firemen in the right direction 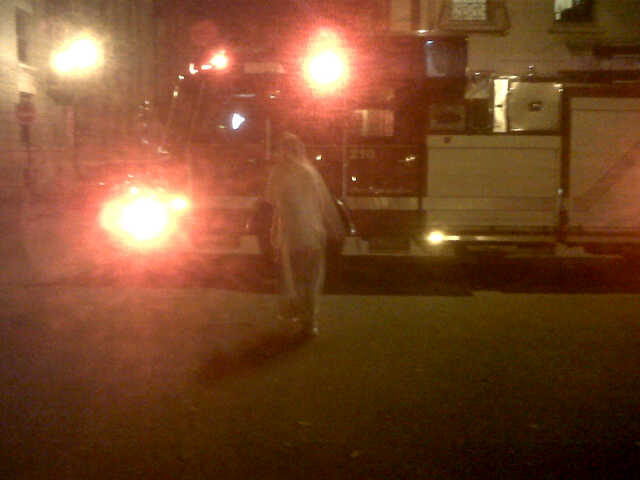 After reorienting the firetruck, Kinsey and I sprint back up to our apartment. We want to see the party get busted, of course. Within seconds, a gargantuan plume of smoke rises from where the fire had been raging just moments earlier. Kinsey insists on opening the window to get a better view of the action, and our apartment fills with smoke. Meanwhile, half a dozen firemen in full uniform march around the backyard. (It's difficult to tell whether they are real firemen or costumed party guests.) The firemen leave and the police show up. The music stops, but the drunken yelling and screaming do not. At this point it is well past 1:30 am, so Kinsey and I saunter back to our beds and decide to make good use of our neon orange earplugs.

I sleep soundly in the sweet, sweet satisfaction of knowing I am a dream tenant.

Goodness only knows how Emily slept through the whole thing.
Posted by Katherine Ernst at 21:53