Cuban Adventures with Emily and Carol!

This past week I was lucky enough to be taken on a wonderful trip with my Mama to Cuba for reading week! Wow I don't even know where to begin! I suppose I'll start from the very beginning. That's a very good place to start...right? (catch the sound of music reference)

So Thursday Feb 16th was utter madness. I had two midterms and an assignment to turn in and carried my bag around with me all day so that I could run from my last class to the train station! I was met in Toronto by the one and only Papa Neuf and then arrived safely home! I was able to see Jared for breakfast and an attempt at a hike, a wonderful belated Valentine's Day dinner and Midnight in Paris. I also shared a spectacular hour or so with mom and Ange getting a pedicure and was wished well by Grams and Gramps next door! It's always nice to be home!

The Cuban adventure began on Saturday morning by waiting around in the Toronto airport. I may have gotten through almost the entire first book of The Hunger Games before we even got to the beach! Eventually we arrived in Cuba, but we started out with a few bumps (in plans as well as in the roads!) We first arrived to a hotel with no electricity and then the next one had no hot water but it did have mangy cats! Thankfully that was only one night and then we were saved by our tour guide Noel. Opposite to our expectations mom and I were the only ones on the tour! Our next hotel was way up in the mountains and we had the entire place to ourselves! No fighting for pool chairs! During these three days we visited the birth place of Fidel Castro and the place where Christopher Columbus (or Christober Colon in Spanish) first landed in Cuba. We also saw two waterfalls and Cuba's national bird as well as many tropical plants at a botanical garden where we enjoyed fresh coffee too! We also made a quick stop at an orchid garden. One day was spent on a "safari" which ended at a gorgeous white sand beach where I read and swam while mom was attacked by sandflies. Another morning we spent horseback riding in the hills. Needless to say we learned so much about Cuban culture and ate lots of traditional Cuban food. 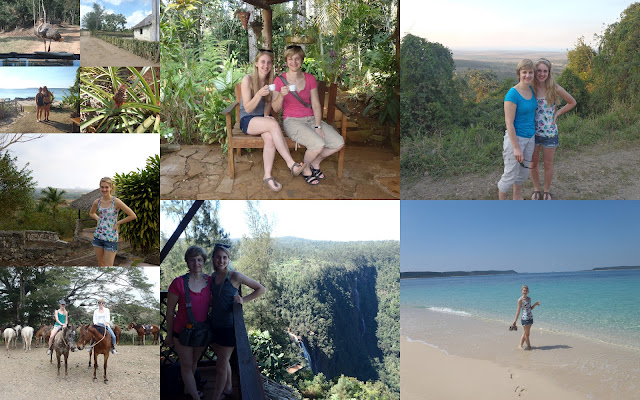 On our fourth day we arrived at Playa Costa Verde (the all inclusive resort) so mom (and me too) could finally relax. This is where the vacation really began! We spent our days sitting on the beach or by the pool. I played volleyball, we both read. Probably the highlight of the whole trip was swimming with dolphins. Mom and I went with a group to an "aquarium" which is really just a fenced in area of a bay. I was able to do three tricks with the dolphins. One where I grabbed onto their fins and they pulled me around the pool, another where I stood straight up in their air on the dolphins noses who were also straight up all the way out of the water and the third where I lay on my belly and then each push my legs so that I am raised out of the water as if I'm skiing! What an experience! Too bad mom botched the photos! ( It's okay mom I still love you! ) Afterwards in a group of 5 mom and I were both able to pet and get kisses from one of the dolphins. Even better yet was the dolphin show where I volunteered to do the trick again where the dolphins jump straight up out of the air with my feet on their noses. Afterwards I got raw fish slapped on my face so that I could get a kiss...yuck! But definitely worth it! Some other highlights were the shows at the resort in the evenings. They had an incredible synchronized swimming team perform one night, wonderful pianists and a string quartet. They also had a magician, a performance of Grease and a Cuban boy band perform! The food wasn't bad either! Mom and I enjoyed the Japanese a la carte restaurant where our chef was entertaining and the food was delicious! Mom even flipped some chicken into the air and caught it on a knife in her other hand. She's so talented! Ha! We also enjoyed the Italian restaurant and the buffet!  Unfortunately we had to head back to cold Canada on Saturday but it was so nice to be able to have lunch with some of the Neufeld family on Sunday and to quickly see Grams and Gramps T again (who absolutely spoil me! I had to take a whole extra bag for all the food they sent me with!) before heading back to even colder Montreal. 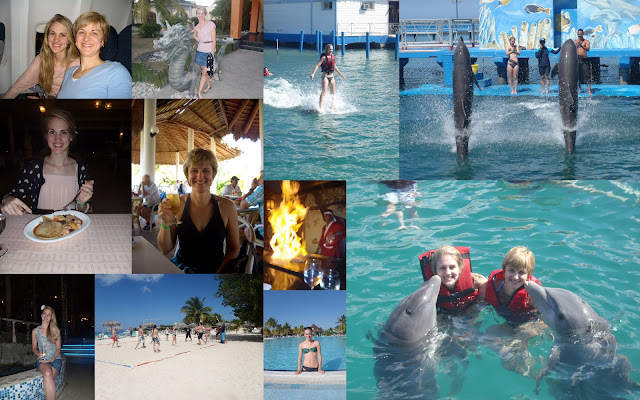 So now I'm back at 1900 Tupper, wearing my Arctic Parka and knee high boots to class and not too happy about it. However the month of March is almost here and contains lots to look forward to! Dad will soon be visiting and then Jared and Brad the weekend after. I hear Katie's 20th birthday is in there somewhere too! So it's not all bad to be back! Waiting (rather impatiently) for Kinsey to return from her extended break so the three of us can all really catch up and then relay all of our adventures to the rest of you!
Posted by Emily Neufeld at 22:25