Since my Valentine's Day was rather low key this year (I spent it studying) I was overjoyed to get to spend almost an entire day with Jared while I was home before leaving for Cuba! Knowing how much I treasure my teddy bear he thought I might appreciate another. This became funny for two reasons. First, as can be seen in the photo below my beautiful sister received a similar bear about 15x the size! Second, because I took Trevor (the little bear) to Cuba with me and he got to go on an adventure of his own! When he wasn't on the bed when we went back to the hotel room I called the front desk, described him and 10 minutes later a knock on the door...Trevor! I think he got to see how laundry's done!
My other belated valentine was waiting for me in Montreal when I returned! A letter from my first roommate ever  that immediately brought me to tears as I read it. Morgan is one special girl! Her homemade Valentine went straight to the fridge so I can see it every day!


I believe I am still waiting on another belated Valentine. Canada Post these days eh? Unless mom just is claiming she sent something...love you Mama Neuf :)


So although my February 14th was uneventful my Valentines are out there! Thinking of you all! 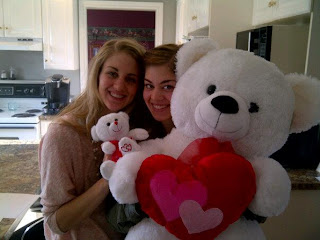 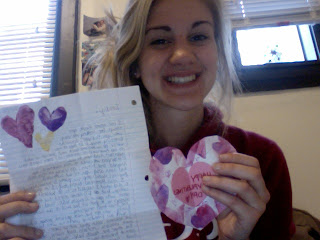